Earlier this year, in March, I gave my outlook for Bitcoin in 2018 in my Price Prediction Post. In it I called for a $100,000 value per bitcoin by the end of 2018. It is now mid-September and price has been yo-yo-ing between $6k-$8k since February.

With 3 and a bit months remaining it appears that I will miss my target by a large margin so, I thought a good exercise would be to revisit my reasoning, acknowledge the flaws and the sound arguments.

Remember the disclaimer: If my prediction materializes, it would be pure luck; if wrong, it’s because all predictions in a chaotic universe are wrong.

To be clear, I still fully believe Bitcoin will reach the $100,000 valuation and continue far higher, the difficulty is guessing exactly when it will occur.

Bitcoin is stronger, more reliable and easier to use than ever before. Technical development, education, institutional+retail activity, merchant adoption and art are all accelerating the growth of the Bitcoin ecosystem. 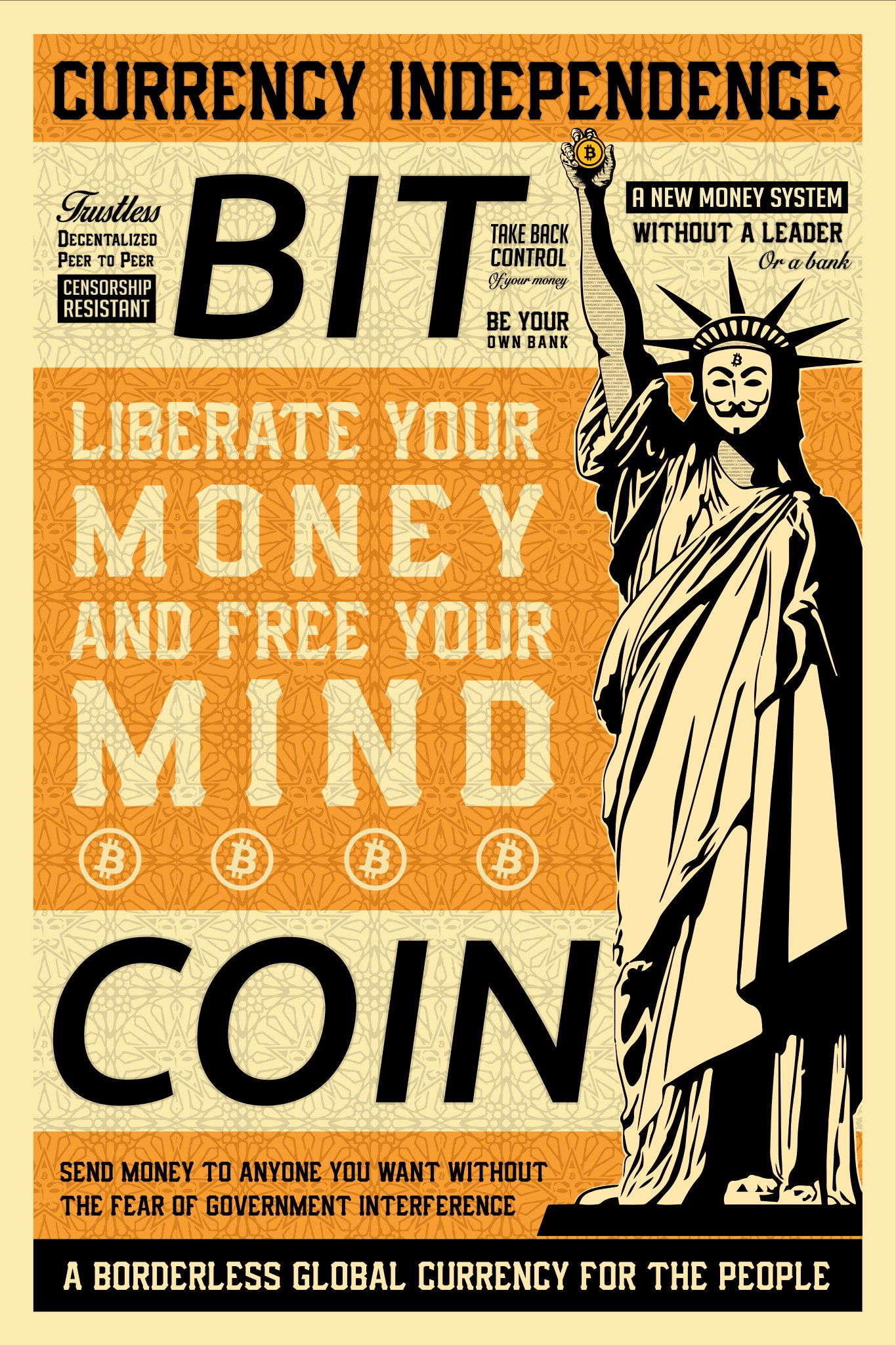 Hash rate has increased 10-fold over the past year, which means that the network is 10 times more secure and that billions of new dollars are now vested in the success of Bitcoin as a worldwide monetary instrument.

Here's what it's like to buy an actual real coffee using the #LightningNetwork. Lightning is now live as a payment option at The Botanist Kitchen and Bar #brisbaneairport Spoiler: it works 🙂 Thanks @TravelbyBit and @roomofsatoshi pic.twitter.com/yT0Zipc0e0

Improvements toward fungibility and privacy on Bitcoin’s base layer, have made significant progress during the year, with some implementation expected in 2020.

Awareness, education and utility increases daily. All the while we edge closer to the next “halvening” (mid-2020), providing a stark reminder of Bitcoin’s immutable scarcity.

The fundamentals are sound.

If the fundamentals are sound and improving then why doesn’t price simply move up with a nice steady gradient?

Human behaviour (praxeology) is complex and has a major bias toward emotion. So it is not only logic that must be considered but, perhaps more importantly, narrative and belief. People need stories which they can believe in, fact-based or imaginary, in order to act.

Narrative is especially important when we argue over monetary concepts.

narrative
noun
Narrative is a powerful motivator. It can convince people that racial discrimination is not racism because of past injustices or to achieve “transformation”.
It can trick us into believing that taxation is not theft.
Narrative can convince people who call themselves “Hutus” that “Tutsis” are actually cockroaches who should all be machete’d to death.
It’s so powerful that people are convinced there’s a genocide against white South Africans. To me (sitting at my desk typing this) that seems like hyperbole but, to the family of a murdered farmer it may seem like reality. Perspective is important.

Now that I have a slightly better perspective of monetary history and economics, compared to 12 months ago, I have come to believe that there is no perfect solution to money. It is a social construct and always will be. A means of exchanging value between multiple parties with varying levels of trust. Whether we adopt a single global money which is strictly limited, favour inflationary debt-based currencies, revert to a barter system or utilise a combination of all possible monies, is up to the market to decide.

Even Bitcoin’s role/purpose is heavily debated. See: The Many Faces of Bitcoin

I believe I made some major errors which fuelled my prediction.

The broad market is not so much interested in the network design, monetary evolution, nor the social consequences of Bitcoin. Rather, individuals are interested in what Bitcoin can do for them – how will it improve their lives? Thus, the main catalysts for adoption will be need & greed.

In territories with weak or failing currency (Venezuela, Turkey, South Africa, emerging markets, Japan) or under trade sanctions (Iran, North Korea) or strict capital flight restrictions (China) there is a desperate need for stable money which is independent of the State. Bitcoin is the best instrument for these populations and will significantly improve their livelihoods. This demand is driven by need.

In territories where the currency is stable, and banking and investment products are easily accessible there is no immediate need for Bitcoin. This class of people will only be attracted to Bitcoin for the possibility of making large returns on investment. This demand will peak during bull markets and subside during down cycles. Driven by greed.

Personal sovereignty and privacy are not really valued by the broad market (everyone still uses Facebook, Google and Apple products; willingly or unknowingly submit to KYC/AML regulations and aren’t really sure what encryption is) and thus these use-cases for Bitcoin will do little increase adoption outside of the black market and cypherpunk circles.

So it’s need, greed and competing schools of propaganda which will determine how the market utilizes Bitcoin, which will be reflected via price movements.

For Bitcoin to succeed it needs legitimacy, not from a legal standpoint, but in the minds of its users and potential new users.

Why did Bitcoin skyrocket from $900 to $20,000 last year? Is there a particular reason or justification for either of those prices? How about the current price of $6,200? Which is more appropriate?

During that time, the technical aspects of the Bitcoin network changed very little. So, the only explanation that makes sense to me, to explain those kinds of movement, is that the market is dominated (short-term) by emotion.

Bitcoin fundamentals have not changed, only price and sentiment did. #capitulation

It seems that we will always overreact, in both directions. Euphoria took us to $20k and doubt threw us back down to $6k. After a year of sick gainz, the market suddenly looked at one another and said, “hold on, isn’t this crazy? What is a bitcoin anyway? How can we go up 20x in single year?” and then proceeded to devalue itself by almost 80%.

During the euphoria, a natural human emotion, Bitcoin seems infallible and promises to make the whole world rich. Tom, Dick even Harry’s dog (with zero research) all pile their savings in. Then doubt creeps in, infects our logic, and price starts to plummet. Harry and his dog are financially rekt and will harbour distrust and disgust toward the market, until they get greedy again and look for the next golden goose.

Judging from historical movements, I think that price will repeat this same cycle of sick gainz followed by fear & doubt. The periods are hard to guess but my gut tells me we will see faster, steeper periods of appreciation followed by longer, slower periods of decline bottoming at a higher level than the previous peak.

The reason the down cycle ends at higher levels than previous all time highs, I suspect, is because during each boom cycle Bitcoin gains a new set of true believers (or hodlers of last resort as coined by Trace Mayer) who now consider BTC their unit of account.

Looking at similar advancements in human history, like the arrival of the Gutenberg Press or the Internet, we can see similar reactions to new systems. Taking a quick glance we assume that the transition was smooth and obvious and that people instantly knew the role and value of new technologies. If we study deeper we see that it was not so.

Earlier in this piece, I facetiously asked which price was more appropriate, $900 $20,000 or $6,200. No individual can give a true answer (or it can only be true for themselves).

Price is the market’s most simple and most fascinating signal. It takes into account all the narratives; the excitement; the skepticism; sentiment; facts; lies; and churns out a single decipherable piece of information from which we can make real life decisions.

It is a fascinating piece of data. The market is always right, we are simply players in its game. 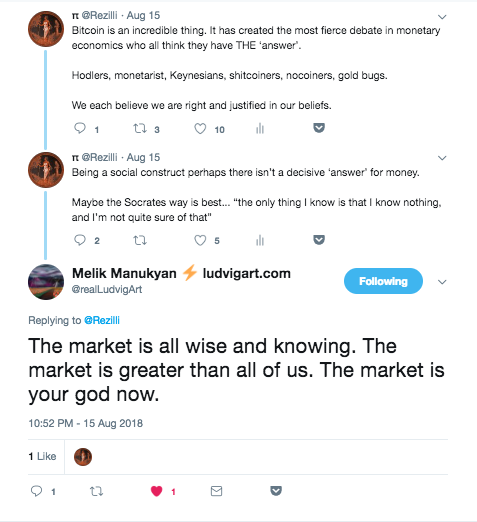 What are predictions good for?

All predictions are wrong, some are just less wrong than others. However, predictions are imperative for us to adequately plan our futures and provides a framework to inform present action leading to a desired outcome. They are also a clever and fun way of sharing information.

Predictions from other commentators allow me to act on how I perceive others might act. Similarly, by sharing my information the market can respond to my views.

The euphoria and the doubt are both justified. Bitcoin is contributing to a healthier, richer economy with better social relations, and there is also a non-zero probability that the system may fail. Co-ordinated government attacks, infrastructure failure or simply a lack of public interest. The possibilities are endless and exciting, it’s sure to be an interesting ride.