Let’s begin by defining “Hodl” so that we all understand exactly what a “Hodler” is:

“Hodl” – To Hodl is to resist the urge to sell despite enormous price fluctuations. This applies to both bull and bear markets, in which panic and/or greed pressures people to sell their Bitcoin. Hodlers are usually fundamentalists and believe in the positive social effects that a Bitcoin economy could bring about.

The term originates from this Bitcoin forum post where the author misspelled the word “hold”. Whether it was done intentionally or not isn’t clear but it is now part of Bitcoin folklore.

Also for clarity I will define a “nocoiner” as I will refer to them further down. 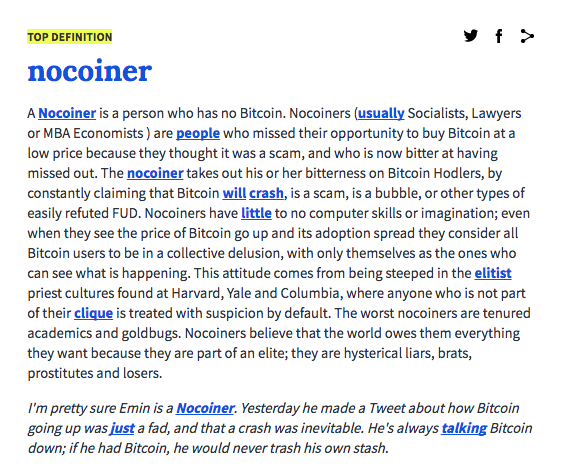 Done with definitions, now into the crux of this post.

Everything in life is a gamble. There is inherent risk in everything. Just getting out of bed in the morning and leaving the house is a risk too high for some – just ask any agoraphobe.

What nocoiners fail to recognise is that inaction also possesses inherent risk (Darwinism, adapt or die). Specifically, by not investing in Bitcoin you are laying all your chips on the current established market and monetary system. Those who did so in 1929, 1989 and in 2008 got financially ruined. Those who bet on the Weimar Republic, Argentine Peso, Zimbabwean Dollar, Venezuelan Bolivars, et al have all been ruined. Inevitably the US Dollar will find similar collapse, and rather soon by my estimates.

Whatever bets you take in your lives, whether it be on relationships, your career, your choice of food or your financial decisions the most important consideration is to understand WHY you are choosing a particular path.

The widespread panic and concern that I receive each time Bitcoin price goes into a spiral exposes the motives of these panicked investors. Lacking social or political motivation for using Bitcoin, they are participating in order to make gains in government mandated currency (ZAR;GBP;USD;EUR whatever). Thus, their only metric for success/failure is the fiat based market price. There is zero consideration for the fundamental components of the Bitcoin ecosystem. Decentralization, hash power, censorship resistance, permissionless nature, borderless restrictions – each of these properties create value.

If any of my earlier posts were read then you would know why I am a Bitcoiner. I believe in the social value of a trustless, censorship resistant network which can be used as money.

Divorced from market sentiment, I believe the $ to be worthless (and worse it is a sower of destruction and misery the world over). Bitcoin is the complete antithesis of the $. It is a liberator of individuals, a basis on which to build a better society.

Do not conflate my Hodling with hoarding. I use my Bitcoin on a daily basis. I pay with it wherever I can and, wherever I cannot, I try to convince the vendor to start accepting bitcoin. I earn, spend and live off of Bitcoin. I have no intention to ever sell my bitcoin back into any fiat currency. So I am relatively immune from wild price fluctuations.

Sure, I enjoy it when price goes up because it serves as a scoreboard to show that the market is coming to the same realizations that I have had. When price goes down I see it as a deficiency among Bitcoiners for failing to properly educate and spread adoption (and a glorious opportunity to accumulate more bitcoins).

I can appreciate that not everyone holds the same views as I do and also that there are other financial pressures in their lives which require short term access to fiat currency. That’s fine, I have no problem with that, except that these people are unsure of their motives for using Bitcoin. They are uncertain investors.

There’s nothing wrong with using Bitcoin to speculate and earn a million dollars, but it is a problem if you don’t know your motivations before entering the market.

– Why is Bitcoin up?

– Why is Bitcoin crashing?

Neither of those hypothetical headlines actually means anything. Neither of them affect the fundamental behaviour of the Bitcoin Protocol. The actions that ordinary people take each and every day are of importance.

It also helps that Bitcoin is somewhat extra-judicial and is easily operated outside of legal supervision, so a Trump (or any other bobble-head) headline is meaningless.

There is never a simple explanation to short-term market movements, and neither is there an easy explanation for long-term movements, just the prevailing narrative.

The very basis of financial news media is flawed. They are reading tea leaves to determine causation in type-2 chaotic systems. "No one knows" is the correct but unprofitable answer. https://t.co/30IIDj1P9A

If people questioned their fiat currencies half as critically as they question Bitcoin then price would rocket to $100,000 overnight and would approach infinity with each new mind that questions what, where and how their money works.

In the event that you lose faith in Pound Sterling as good money, worry not! The Bank of England promises to exchange your £’s for an equivalent sum of the same £’s which you just lost faith in. #logic #bitcoin pic.twitter.com/JK14PaXsrS

Pound Sterling, “I promise to pay the bearer on demand the sum of x pounds”. Huh?

Why is the Queen of England on the Canadian and Australian Dollar notes and coinage?

Why do certain individuals have their signatures on my national currency? Who the hell is Gill Marcus?

What is legal tender, and why do US Dollars trust God?

I do believe, however, that markets have a certain intangible wisdom. This theory is best encapsulated by Friedrich Hayek in his paper The Use of Knowledge in Society. In the long-run I believe markets are our best mechanism to find fair value. If you believe, as I do, that fiat money is fundamentally broken (thus worthless) and Bitcoin is fundamentally sound (thus valuable) then the fair $ value of BTC is literally infinity. We are just experiencing time lags in between zero and this global realisation. We are only 9 years along this experiment – have some patience.

The point in time when Bitcoin reaches prices which just seem nonsensical, is the moment when global consciousness shifts and we move onto the Bitcoin Standard.

Please also take a critical look at the arguments which the nocoiners present. Rarely is their argument fact-based and is usually no more than a desperate smearing. These smears must be identified for what they are: uneducated and computationally illiterate opinions.

Opponents to Bitcoin are betting on the status-quo. They are betting that our debt-ridden economy (which has sunk entire nations and burdened future generations) will miraculously recover and bring prosperity to all. They believe that presidents, kings, CEOs, intellectual monopolists and central bankers have the solutions to our problems.

Bitcoin believes in the combined intellectual potential of the entire world – that’s what open-source means.

For me, it’s simple: I am betting on freedom, sharing, intelligence, logic, progress and liberty. If Bitcoin fails, we lose all of the above and return to the debt slavery I emerged from. This is a far worse prospect than losing a million bucks.

Lastly I say, seek your motivations. Once you understand yourself you’ll be better placed to understand Bitcoin and what it can do for you.