Bitcoin has done more than to just introduce cryptographic and economic innovations. Bitcoin has encouraged an entire generation to re-learn money and social communication from first principles. This questioning is progressing our society into a higher state of enlightenment.

Cycles of Stagnation and Innovation

Each time we experience a major disruption, like a social revolution, a spiritual awakening, a scientific discovery or the dawn of a new economy it feels as though we are on the precipice of instant and permanent change – to steal from the wise and powerful Lady Gaga, as if we are on the “Edge of Glory”. In reality, change is much slower and I think that MLK jr understood social progress more accurately when he said: “The arc of the universe is slow, but it tends towards justice”. Society continuously goes through cycles of progress, stagnation, death and rebirth. With each rebirth we make only small improvements.

Satoshi Nakamoto began a monetary rebirth in 2009. We are now in the stage of progress where innovation is flourishing as we begin, en masse, to adopt a superior system to the fraud which preceded Bitcoin.

When fiat money was first introduced it also offered grand opportunities for the betterment of society, which it achieved in many respects. Suddenly markets were everywhere, more accessible, more liquid and farther reaching than ever before. Initially, it did create a better world with more freedom, more opportunity and hope for a prosperous future. Over time this stagnates and individuals or groups manipulate and twist the system to suit their narrow desires. This is achieved, predominantly, by creating institutions of illusory power.

Monarchies claim dominion over certain lands and fool the public into believing they are ordained by God. Gradually, most (not all) illusions of Monarchy get overthrown by truth, and they collapse to popular revolt.

Similarly, the State is an institution which successfully claims monopoly of the legitimate use of violence within a bounded geographic region [*credit: Max Weber]. Eventually our collective realization that the power they wield is imaginary, will result in their demise.

Society then develops a slightly better way of organizing ourselves, implements it, makes incremental progress until it also is overthrown. This cycle can be vaguely related to Plato’s 5 regimes. 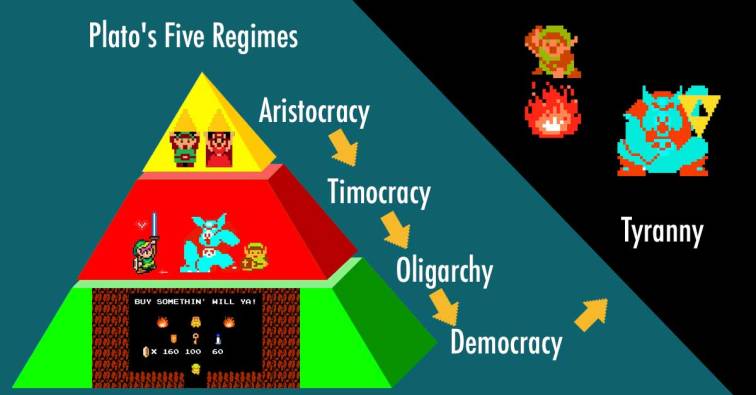 Democratic Government is simply the current form of our ruling class. Their day-to-day work is to go about creating institutions of illusory power – not to serve constituents.

Government money was one of these highly effective illusory institutions. The Federal Reserve Act of 1913 was a way for the U.S. government and banking interests to privatize the money supply for an entire nation. Exactly whose interests did congress have in mind when they ratified this act?

The aftermath of WWII made the U.S. the world’s foremost superpower. Thereupon they set out on an imperial campaign to discredit opposing systems while forcefully – through the barrel of a gun, and under the hiss of the drone – installing their version of debt-based “democracy”. They fought “communism”, in name only, but, in truth, any system other than a centrally banked monetary system was destroyed. It is not by coincidence that almost every nation on earth adopted this same system.

To my South African readers, I’m sure you’ve all asked yourselves how it transpired that the African National Congress (ANC) left intact the South African Reserve Bank (SARB) which stands completely antithetically to their very own Freedom Charter adopted in 1955.

The People Shall Share In The Country’s Wealth!
The national wealth of our country, the heritage of all South Africans, shall be restored to the people;
The mineral wealth beneath the soil, the banks and monopoly industry shall be transferred to the ownership of the people as a whole;
All other industry and trade shall be controlled to assist the well-being of the people;
All people shall have equal rights to trade where they choose, to manufacture and to enter all trades, crafts and professions.

The Charter endorses a credit-based system, yet the architects of the document decided to retain a debt-based system. Typical humans! I must’ve missed the part where it says, “there shall be 668 shareholders (plus government) who should earn dividends and profits arising from the SARB!”

The Freedom Charter is a colossal humanist document in its entirety. We would do well to implement its values in our day-to-day lives. It is a national tragedy that the ANC has veered so far away from the Charter’s core principles and values – this, I call Institutional Bastardization.

Definition: ‘Institutional Bastardization’ – Is the theory that any and all institutions will deviate from their purported values, founding or adopted, and will act to serve only the needs of their ruling elite, so far as public perception will allow.

see: “Democracy only exists in your imagination”

Democratic Oath of office. Purported value – “To uphold the constitution”.

Obama regularly carried out extrajudicial assassinations including against US citizens.

These contradictions are found everywhere. Whether it be in religious, judicial, educational, political and even private institutions. We consistently contradict ourselves.

So how does Bitcoin save us from Institutional Bastardization? Rather simply. It is not an institution. It is an opt-in, machine operated system answerable only to code. Bitcoin does not care about the behavior or desires of any single person or entity. Computers simply execute code. Those who learn how to extract value out of that code will profit, those who do not, will be stuck with soon-to-be worthless government paper.

Bitcoin has achieved trust-less, secure, peer-to-peer transacting without any need for a centralized intermediary. This feature of Bitcoin must never be forgotten.

Bitcoin requires only code. The capable user can interact with Bitcoin completely independently but this requires a minimum level of expertise. The incapable user will require intermediaries to enable them to participate. Exchanges, wallet providers, brokers, banks, insurers and payment processors are already being built and used in the market.

I expect financial institutions, similar to what exists today, to emerge but to be centered around Bitcoin. Do not confuse the values and behavior of these institutions as analogous to Bitcoin. They are like any other profit seeking entity. No institution (profit driven) has ever had the best interests of their customer at hand, despite their marketing campaigns attempting to convince you otherwise.

As they grow and morph into monsters of their own they will also try to confuddle the public and will deviate ever further from the founding features of Bitcoin. Worse, they will attempt to hijack the Bitcoin name; this exact battle is playing out right now (research BIP148 vs SegWit2x) and will play out many more times in future. Each time Bitcoin proves itself resistant to these attacks it will increase in value.

Bitcoin will not only affect financial institutions but will also heavily influence our new social and political institutions. As capitalist democracies begin to fail we will see a move toward localized, anarchistic modes of governance.

A vital feature of Bitcoin is the ability to remove oneself from dependence on fatally flawed institutions. Bitcoin gives us personal sovereignty and control over our financial lives.

Legitimization will assist in creating these new institutions and will be used as a tool for the ruling class to try and distort Bitcoin into something which they can control. Eight years has shown that they cannot and will not succeed in trying to institutionalize [centralize] Bitcoin. This is testament to the robustness of a decentralized network.

In opposition to a previous view-point of mine regarding legitimization, I now believe that Bitcoin does not require any false legitimacy from any government nor corporation. They are just as free to participate, or not, like any other individual. Those members of the population who require a veil of legitimacy in order to enter the Bitcoin economy will be left behind. Bitcoin is better served by participants who are well-informed independent thinkers. Those requiring legitimacy from some institution of illusory power are probably neither.

Bitcoin is here and it is NOW. Educate yourself and get involved.

“The Banks are Dead!”

New does not necessarily imply death of the old. Similarly to the way that heirlooms, commodities and various collectibles are all still used as stores of value, the institutions of old will still exist, and paper money will still be with us for a very long time.

The old system is held in place by a tenuous intertwining of fortunes between the institutions and the people who use them. We know the system is rigged but if we tear it down we tear ourselves down with it – unless we have prepared for the eventuality. For a century we have not been given an alternative and we’ve been schooled into believing that alternatives are impossible. Bitcoin corrects these fallacies. The shorter the time-lag between realization and adoption the greater we stand to benefit.

Satoshi has given us an incredible gift. An opportunity to realize that real power lies in the will of the people not the empty halls of Westminster, the Union Buildings or Capitol Hill. An opportunity which we cannot spurn; upon which our freedom depends. I shall not ignore it.

Bitcoin does not, and never will need any institutions.

Bitcoin is – and that is all.