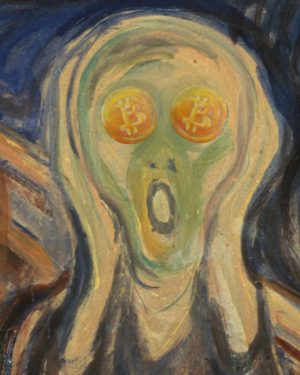 Following in the wake of the number 0, the wheel, penicillin and radio waves; Bitcoin is amongst the most significant creations in human history. However, this new system is still in its infancy and faces many potential pitfalls. It would be irresponsible to invest in Bitcoin without assessing these threats.

Different to personal security, this piece is concerned with the long-term survival and stability of the entire ecosystem. We will hypothesize scenarios in which Bitcoin’s growth and adoption is stifled or potentially destroyed altogether.

A simplified description of Bitcoin is that it is a messaging system. Any system of communication requires a strong and stable network to relay its messages.

Humans utilize many forms of data transfer: verbal, radio, radar, morse code, written, digital – each with their own advantages and limitations. A verbal network can only reach as far as the sound travels and is hindered by language barriers. Morse code is slow and inefficient. Letters rely on a global transportation network and hand delivery.

Bitcoin can theoretically operate over any of these networks, however in order to be useful and valuable it needs to have a global reach, to be secure and fast. Thus, Satoshi chose the most efficient data network humans have ever created – the internet.

This makes Bitcoin extremely reliant on the network infrastructure of the internet, and hence, can only be as stable and reliable as the internet itself. Should the internet fail for whatever reason then the value of Bitcoin moves toward zero.

To be able to quantify the probability of the internet collapsing or performing worse than it does today, requires a deeper understanding of the physical infrastructure and wireless networks which make the internet. See here and here for more information.

Bitcoin’s legitimacy is a prickly subject to grapple. Some are of the opinion that Bitcoin exists precisely to subvert the government and financial authorities; others believe that it would gain greater acceptance in a regulated environment.

This is a massive grey area in most territories as there remain so many unanswered questions. Should cryptocurrencies be regulated? Yes/No? If they are to be regulated what regulations should apply? Once regulated, how can those rules be enforced and policed? Currently very few governments or financial authorities have provided concrete answers to these questions.

The main areas of concern, from the government’s perspective, are AML (anti-money laundering), KYC (know your customer) and tax collection. Consumer protection considerations, from the investor’s perspective, is another important area of regulation which is currently non-existent.

Possible scenarios to prepare for:

In my opinion, the simpler the legal framework the better. I would favour legal recognition and basic regulations to exist. Consumer protection which focuses on education rather than 3rd party guardianship, zero surveillance (economic privacy is a basic right) and relatively standard tax codes. Companies tax, consumption tax like VAT or GST and zero personal income tax.

Governments may fear that tax revenues would dissipate if they don’t have a mechanism to track and control the movement of money but this is a fearful and short-sighted assumption. Most tax collection is already done based on bracket estimates and relies on the honesty of its law-abiding citizens. Every economy will always have good and bad actors and there will always be ways to subvert paying tax. The point of any government should be to make their citizens feel vested in the prosperity of the nation and should want to pay tax without feeling forced by law or under threat of punishment.

Noam Chomsky likes to say that the health of a nation can always be judged by the mood on the day of submitting tax returns. If the atmosphere is happy and participatory, then you can be rather sure that the nation is healthy (by all metrics) and has a hopeful outlook for the future. Conversely, a nation that requires government spying and a violent police force to enforce its tax collection is probably a nation that is mired in corruption and bound to fail. Noam’s view articulated by him in a short 40-second video.

While the legal challenges facing the cryptocurrency industry make it onerous for participants in certain territories, it poses a negligible threat to the survival of Bitcoin itself.

No action, public or private, in 2017 can be performed without considering the effect on the environment. Bitcoin is not excluded from this and must seriously asses the impact it leaves, and the methods by which it consumes the world’s resources.

Bitcoin already consumes a large amount of energy and will continue to grow. If the computing power required to maintain the Blockchain further destroys our environment then the Bitcoin project becomes self-defeating.

Bitcoin’s circular value system plays an important role while assessing this looming threat (not merely to Bitcoin but to all human life on Earth). Value is created by the cleverly incentivised relationship between ecosystem participants – illustrated below:

If the resources required become too onerous on the environment then this threatens the security cog of the value loop. As our environment becomes unstable and dangerous then the methods, and sources, for Bitcoin’s energy consumption will need to be seriously researched and designed in such a way that it leaves no averse effects on the environment.

This short article provides the outline of the topic but it is important to delve even deeper and educate yourselves further by reading this wonderfully in depth research paper by Hass McCook.

Of relevance is also the competing methodologies of PoW (proof-of-work) and PoS (proof-of-stake).

PoW is Satoshi’s solution to the double-spend problem. It also guards the network against attackers and ensures that only the longest chain (i.e. the chain with the greatest difficulty) perpetuates.

PoS is a similar system, the most striking difference being the mechanism by which it selects the miner of subsequent blocks. As opposed to a probabilistic race between hashing powers, PoS deterministically ranks its stakeholders and pre-selects the miner of the next block. This method doesn’t require mining difficulty to continuously increase and thus doesn’t necessitate greater computing power. It is considered less secure than PoW but there are numerous and varying opinions amongst professional cryptographers.

Ethereum is busy implementing their plan to switch protocol from PoW to PoS.

Without going into great detail, quantum computing poses a plausible threat to the security of Bitcoin. Simply put it may become possible for a CPU with large enough power to overwhelm any system with brute force.

The natural defence against this is that Bitcoin itself has the ability to update, improve and implement new features which can make it resistant, even, to quantum computing.

A very brief article on this subject can be found here.

Governance is perhaps the most misunderstood element within the Bitcoin ecosystem. Without an Emperor, an ordained Sovereign, nor a President-elect, Bitcoin is an exquisite example of an anarchistic (meaning self-organizing – not to be confused with chaos) governance model. (Though we don’t have any leaders or top-down structures we can claim a God, and its name is Satoshi Nakamoto. Just like the universe which sprouted us, we’ve been left to our own devices on how best to meander through this collective experience we call existence).

To learn more about progressive Anarchy have a gander at anarchism.is

This still begs the question, who is running Bitcoin? who makes changes to the protocol? and who maintains the network? The answer is no-one and everyone!

Every developer, miner, full node and light client creates, maintains, populates and perpetuates the Bitcoin network by following the current protocol. While each participant contributes at a different level and to slightly different magnitudes, all are necessary for the economy to properly function.

Sufficiently decentralized networks make it impossible, or at the very least infeasible, for any single person or entity to make unilateral decisions on behalf of that network. These unilateral decisions may involve protocol changes, double-spend attacks, false transactions and coin-creation. Attempting this is both economically strenuous and practically near-impossible for an individual actor. It follows, that it is also economically strenuous and practically near-impossible for any individual to garner the support necessary to succeed in attempting any unilaterally coerced changes.

Thus, everyone (to varying extents) maintains the network, but no-one controls the network.

Bitcoin Improvement Proposals (BIPs) is the mechanism to which the community currently refers. BIP: 2 describes the entire structure and process that each and every BIP must follow. For a material understanding of how Bitcoin seeks to reach consensus it is highly recommended that BIP: 2 be read in its entirety.

If this method of self-organising governance and super-majority decision making fails, then the usurp-ability of Bitcoin becomes threatened. Community failure to reach agreement on key issues (such as scalability and block size) will result in the market losing faith in Bitcoin; the system will stagnate, lose value and likely be overtaken by a new cryptocurrency.

This is why contentious hard or soft forks are so newsworthy within the crypto community. It displays the level of debate and exposes our ability/inability to reach a beneficial consensus.

Cryptocurrencies and blockchain systems will form part of everyday human activity – this is undeniable. Bitcoin itself, cannot die: in fact any implementation of protocol cannot die provided there is at least 1 processing unit running the code. The more nuanced question (and the one you care about answering) is which protocol will the market trust? This is the protocol which will contain the most value.

Bitcoin may undergo changes, it may split into multiple versions, it may be overtaken by alternative cryptos, but it will always survive as one form or another. A true anarchistic system, Bitcoin relies upon cooperation. Non-cooperation is the gravest and most tangible threat to Bitcoin – if we cease to debate, innovate, collaborate, compromise, empathize, and ultimately, reach agreement only then can Bitcoin fail – if we fail. And if we succeed, a whole new world awaits.

More than a monetary revolution, more so than a technological revolution; Bitcoin is a social design revolution. A type of awakening. It has reminded us that there is genuine value in cooperation.

Our tax payments routinely finance public theft; corruption; social engineering; feudal subjugation; forced labour; and large scale domestic & international violence. We now have an opportunity to divest from this cruelty. By investing in a monetary system which incentivises social cooperation we unconsciously spread these values into our physical environment. How incredible is it that Bitcoin miners in China, Iceland or the USA make it possible for citizens in Venezuela to eat? Or for workers in South Africa to protect their savings from a government suffering from revolutionary-inertia without any sense of self nor community?

Imagine a world where every human on earth has fair access to stable money – money which is safe, incorruptible, immutable and no entity on earth has the power to manipulate it. Money that can be transacted between any two humans on earth quicker and cheaper than ever before. This is a future which is fast approaching and it is a future that I choose to work towards. Surely, this is a revolution which we should all be part of.